In Warsaw, between the wars, Yiddish-speaking artists turned cabaret into a vehicle for national resistance, optimism, and pride. Kleynkunst! tells their story. Far from the shtetl, here was a world of tangos and Tin Pan Alley, of Hassidic niggunim meets Mack the Knife, of Purim balls, Socialist arguments, Jewish gangsters, Yiddish flappers, and homemade schnapps. For a brief period, the Jews of Warsaw were full of hope.

Kleynkunst! was produced off-Broadway by The National Yiddish Theatre–Folksbiene in 2007-2008, to box office and critical acclaim.

Rebecca spent five years exploring Warsaw’s cabaret culture, including doing onsite archival research in Warsaw. She has uncovered priceless lost songs and comedic sketches. It is hard to believe just how creative and outspoken these artists were. But believe you will…once you see Kleynkunst!

The show runs an hour-and-a-half and requires minimal set up and lighting. It is appropriate for ages 13 and up. The show is performed mostly in English; no prior knowledge of Yiddish required! 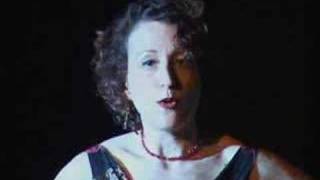 “Across an emotional spectrum from saucy irreverence, high spirits and nostalgia to the bitterest despair and back to hope…illuminating, ultimately touching.”

“Fascinating historical excavation has gone on with Kleynkunst!…funny and startling.”

“Kleynkunst! is all about the power art has for enabling people to celebrate life and endure its hardships. And it is brilliant. Mazel Tov!”

“A terrific showcase for two exceptional performers…Kleynkunst! is a memorable tribute to the importance and lasting power of art.”

“It is what cabaret can be about: a bawdy, brooding, satirical, hilarious, and powerful glimpse into the past…”

Read all reviews and testimonials